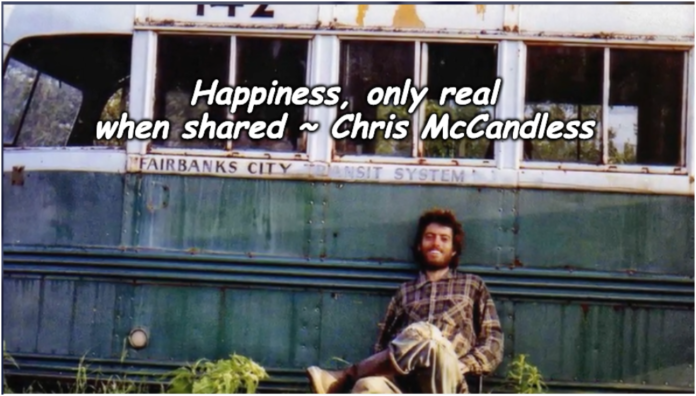 Into The Wild is a movie that was released back in 2007. It is based on the real life experiences of the adventurer Chris McCandless. I remember watching it late one night not long after its release. I found it to be a bit boring and depressing given the sleepy state that I was in at the time.

But recently my interest in the movie was piqued again when I noticed a friend’s posts on Facebook from his trip to Alaska. Among the photos was the Fairbanks City Transit System bus that somehow made its way into the Alaskan wilderness. The “Magic Bus” provided shelter for McCandless. So I thought I’d give the movie another try. And I’m so glad I did.

This time around I was wide awake and absorbed the movie’s messages, mostly from Chris but also from the people he encountered during his cross-country trip. For me, it’s a movie that focuses upon the most important things life offers. It’s about sharing, caring, giving, loving and finding God in people and things. And in this scene featuring Hal Holbrook, it’s about forgiveness too.

The movie’s ending is tragic. McCandless’ quest to find freedom in its purest sense, detached from laws, rules, regulations and silly permits needed to row a boat downstream, ultimately fails. He learns the hard way that nature has its own laws. Perhaps even more importantly Chris learns and documents in his journal, that happiness [is] only real when shared.

I encourage you to watch the movie if you haven’t seen it. It features Emile Hirsch in the lead role along with other notables like William Hurt, Vince Vaughn, Marcia Gay Harden, Kristen Stewart, Catherine Keener and Jena Malone. If you have seen it, perhaps you’ll consider another go at it to pick up on things you may have missed the first time around. The messages are as bountiful as the wilderness that McCandless sought. But unlike our bodies and Chris’, messages live in perpetuity.

Previous articleRemembering Dads Who Have Gone
Next articleTradition Doesn’t Graduate