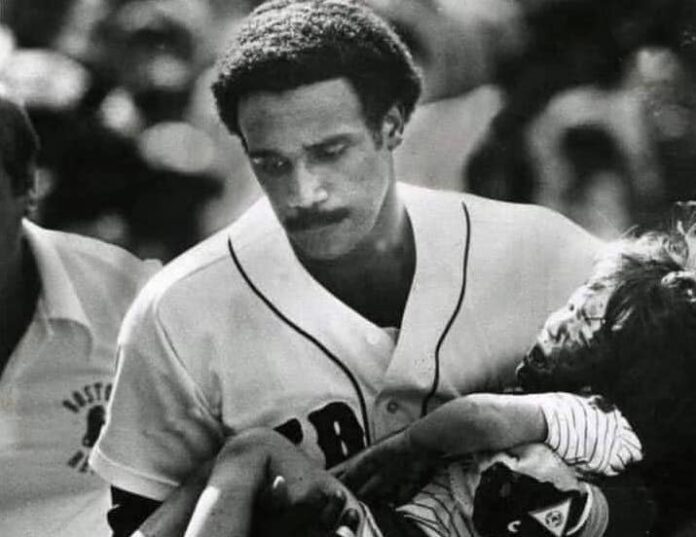 Yesterday while perusing Facebook memories (my favorite feature of the social media platform) a story surfaced about former Red Sox star outfielder and Hall of Famer Jim Rice. The date was August 8, 1982 and the Red Sox hosted the pale hose – aka the Chicago White Sox.

Rice’s teammate Dave Stapleton stepped to the plate and during the at bat, he sprayed a line drive foul, down the first base side that struck a young fan, a 4-year-old boy who attended the game with his brother and Dad. This was not a glancing blow.

As time seemingly stood still while all in attendance absorbed the moment, Rice responded swiftly. He raced into the crowd, lifted the youngster and brought him into the team’s dugout where the Red Sox’ medical staff attended to the toddler, Jonathan Keane.

Keane eventually was taken to the hospital where doctors said that Rice’s efforts likely saved the boy’s life. With a blood stained uniform, Rice returned to the game won by Boston 12-6. The 8-time All Star went 3 for 5 on the day, including a double, triple and 2 RBI. But that wasn’t even close to his biggest contribution.

Later, Rice went to visit young Jonathan at the hospital where he soon realized that the boy’s family was of modest means. Rice reached out to the hospital’s business office and instructed them to send him the medical bills.

Today, the 43-year old Keane lives with his wife and 3 kids in North Carolina. The memory of that day has had a lasting impact on Keane. “You’ve got to live every second. Every moment matters. [And] I also realized it takes a pretty special person to react the way Jim Rice did that day.”

Meanwhile Rice remains active in the community, supporting the Neurofibromatosis Foundation of New England. Rice’s involvement with Major League Baseball’s RBI program (Reviving Baseball in Inner Cities) resulted in the naming of a new youth baseball facility in Roxbury, Massachusetts, in his honor in 1999. A youth recreation center in Rice’s hometown of Anderson, South Carolina, is also named in his honor.