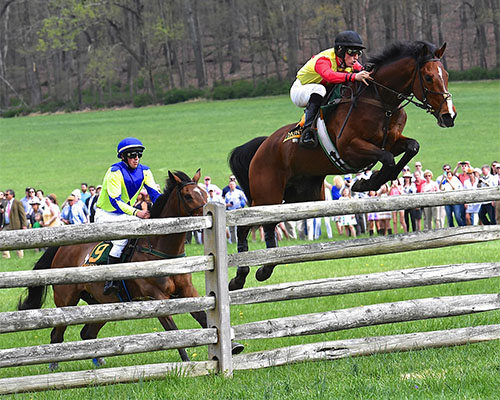 It takes a very special horse to win 3 Maryland Hunt Cups. Senior Senator was anything but ordinary. For part of his racing career, he was Mr. Misunderstood. He had a reputation for being aggressive and difficult to handle. At the race track, his stall doors had a sign warning people that he’s dangerous. Most trainers and jockeys had given up on the idea of him ever being tame enough to compete in a race. But what most people didn’t understand was his personality and why he acted the way he did. They gave up on him before they even gave him a chance to be great, because they didn’t take the time to truly understand him.

Once Senior Senator was in the hands of trainer Joe Davies, he was finally able to live out his full potential. However, the road to success was quite challenging. Davies struggled to understand Senior Senator’s needs and nearly gave up on him after he threw his jockey and jumped in the crowd of spectators at a race. Once Davies was able to uncover his stresses of being at the race track, he was able to accommodate and make Senior Senator feel more comfortable. If Davies didn’t take the time to understand his idiosyncrasies, Senior Senator would not be the remembered the way he is today.

Senior Senator was on track to win his 4th hunt cup when he expectedly died from colic. He was a spectacular horse with an exuberant personality. A horse with so much natural talent and warrior spirit comes around once in a lifetime.

To pay tribute to his legacy, we created a tribute to honor this very special horse and give you a glimpse into his life. Rest in peace Senior Senator and may your legacy always be remembered.

Past Winners of the Maryland Hunt Cup

Previous articleK-9 Arlo: A True Fighter
Next articleLife In The Micro