Home Good Stories She Barks, She Wags, She Talks: The Dogs Taking the Internet and...
FeaturedGood Stories

She Barks, She Wags, She Talks: The Dogs Taking the Internet and Scientists by Surprise 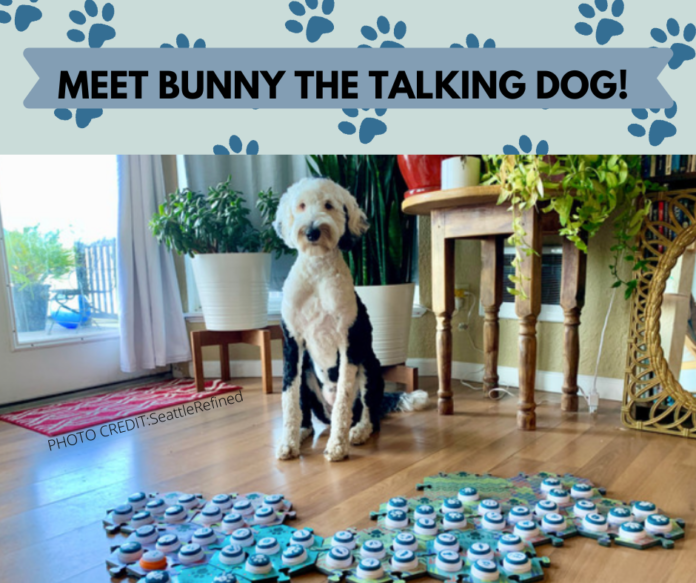 With 5 million followers on TikTok and 500 thousand followers on Instagram, Bunny is an internet star to say the least. But can she really talk to her human? I have to admit, when I first read the caption on the clickbate video that read “Incredible Talking Dog!” I rolled my eyes. Dogs are smart and adorable, but they can’t talk to us, right? Sure, they understand words like “treat” “outside” and “eat” but they could not communicate back to us if they wanted to. I was wrong. Bunny, the 2-year-old Sheepadoodle, proved me wrong. I watched a Tiktok video of her pressing buttons placed on the floor by her owner, each one marked with a symbol indicating the word the button would play when pressed. Bunny pressed the “Mom” button and then pressed the “I love you button.” I thought it was very cute but I also know what my dog will do to get a treat, so I was still skeptical. I remembered reading an article about Clever Hans, the horse that was reported to be able to do math. After being studied by scientists, it had been discovered that Clever Hans had been reading his handlers facial tics, not doing math. This explanation of animal-human communication was coined the Clever Hans Phenomenon. It’s principle being that animals cannot communicate with humans in a meaningful way. Rather, they read human expression and act in a way that earns them food. My initial thought when I saw Bunny the Sheepadoodle was that there must have been a similar explanation. I came across Bunny again on Instagram. This time, I obsessively poured over videos uploaded by her human, Alexis Devine, to find evidence of the Clever Hans effect. But instead what I found was video after video of this dog using sentence structure, acknowledging time, talking about sounds she was hearing outside, and referring to her dog friends by name. This has intrigued scientists and media alike. Alexis and Bunny have been interviewed by The Today Show, People Magazine, and the Wall Street Journal. A group of researchers at the Comparative Cognition Lab at UC San Diego are also highly intrigued by this soft, furry friend. According to some of Alexis daily posts, the Lab at UC San Diego keeps up with Bunny very regularly, studying her interactions and paying great attention to the continuation of her speech.

The idea to provide Bunny with buttons to teach her to speak came from another well-known internet doggie named Stella. Stella’s human is a speech language pathologist and developed the original button-board system to teach her dog Stella to communicate. Christina Hunger noticed the similarities between the way her dog and her toddler patients communicated. “When I brought my puppy Stella home in early 2018, I couldn’t help but notice all of the similarities between her communication skills and those of toddlers right before they begin saying words.” She wanted to help give Stella a voice so she developed the button-board and began training Stella. She also added emotion words to Stella’s board like happy and mad. At this time, Stella can combine up to 5 words in a row to form sentences . Stella even asked for help when one of her buttons was not activating. Alexis, Bunny’s mom, saw what Christina and Stella were up to and decided to try the same with her dog.  Scientist are still studying these two dogs to find out what else they can say and what more they understand. If you’re interested in getting your pup some buttons like the ones Alexis and Bunny use, you can find them here.

Dominique loves taking in the world around her and writing her thoughts on it. Avid library and coffee shop goer, she finds herself wandering city streets up and down the East Coast frequently. When she’s not photographing architecture, she’s probably eating or hiking with her dog, Russell.
Website: https://www.dominiquecarbaugh.com/
IG: https://www.instagram.com/dominiquezoedesigns/ 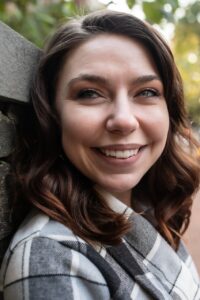