Sunday night was disappointing for the Ravens and their fans. Baltimore lost yet another winnable game to the Patriots in monsoon-like conditions at Gillette Stadium, by the score of 23-17, dropping the Ravens to (6-3) on the season, good for the 7th and final seed in the playoff race as the standings sit today.

During the game, Ravens center Matt Skura struggled. In key situations his errant snaps proved costly and made the challenges of a comeback in those wretched conditions even more daunting. It has been a pattern of late for Skura who has repeatedly delivered snaps far off target, adding to the difficulties of a struggling offense.

Some fans were fed up and took to social media to verbally attack Skura’s wife.

And THAT crosses the line.

Players know what they’ve signed up for when they accept a job as a player in the NFL. They understand that with the handsome pay comes scrutiny. There are few jobs in the world that are as heavily performance-based as those employment opportunities served up by the National Football League.

The players accept the conditions and the criticisms – some better than others. Sometimes it motivates them. Other times it breaks them. It might even break their hearts.

Matt Skura took the high road when he delivered the following message on Instagram in response to the verbal attacks: 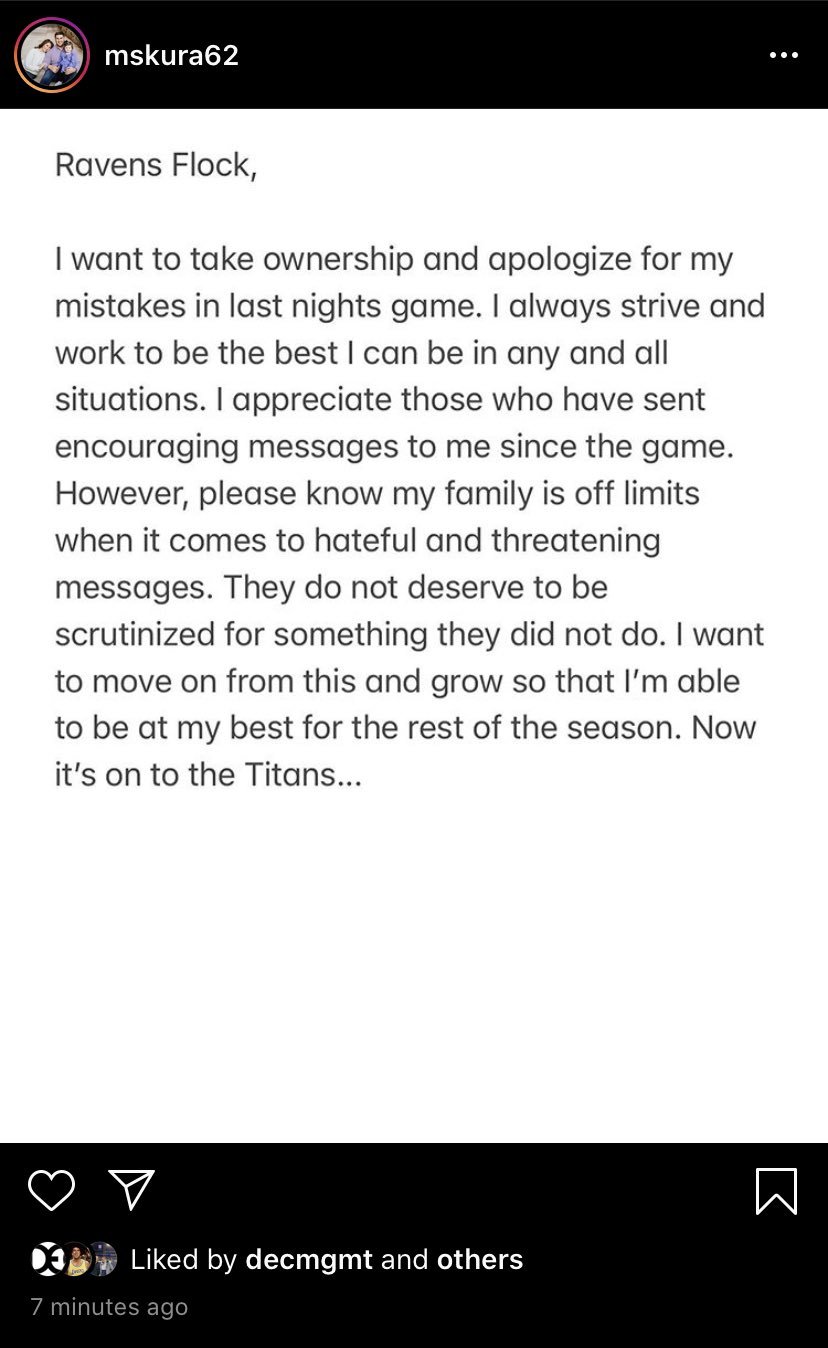 Classy move from Matt and one that certainly doesn’t surprise me. Skura had a devastating knee injury suffered in Los Angeles on November 25, 2019. The injury left Matt with a torn ACL, MCL and PCL, and a dislocated knee cap. His will and determination were unwavering. Against all odds, he was ready to play in an NFL game on September 13, 2020.

That’s a testament to his character and work ethic.

Wise also took notice of the sub-human behavior that some unruly “fans” were dishing out on social media and decided to flip the sinister posts on their collective ear and use the attention directed towards them to elicit a favorable outcome. Wise found that in the form of a charity supported by Skura – Pediatric Brain Tumor Foundation.

I want to take it a step further.

If everyone in #RavensFlock gave $1, we would blow away the fundraising goal.

Let’s turn something ugly into something positive.

Since Matt Wise’s post, the foundation has enjoyed an additional influx of contributions north of $6,000.

Now that’s how you double team an adversary!

If you would like to make a donation to the Pediatric Brain Tumor Foundation, even if it’s just $1, CLICK HERE.

Previous articleMacy’s Holiday Commercial for the Win!
Next articleMy Corona